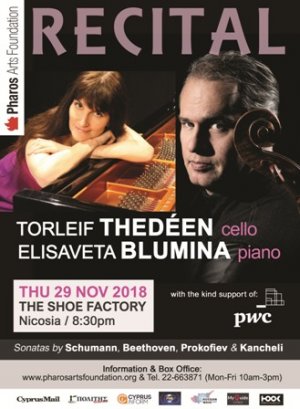 Torleif Thedéen, is one of the most celebrated cellists of our time. She is visiting Cyprus for the first time, to join forces with the eminent German pianist Elisaveta Blumina in a fascinating cello and piano recital, as a part of the pharos Arts Foundation’s Concert & Recital Series.

Having gained a global recognition in 1985 by winning 3 of the world’s most prestigious cello competitions, Thedéen has since appeared as a musician not solely with all the leading orchestras in Scandinavia but also with several of the world’s greatest orchestras, including the London Philharmonic Orchestra, Orchestre Philharmonique de Bordeaux and the Deutsches Symphonie-Orchester Berlin, under the baton of such conductors as Paavo Berglund, Esa-Pekka Salonen and Neeme Järvi. An ECHO Klassik award winner, Blumina has released over 25 albums, which have been received by the press and earned her a reputation as an amazing musician. Her career to-date has taken her from halls such as the Berlin Philharmonic, Laeisz-Halle in Hamburg to Carnegie Hall in New York.

For their recital in Nicosia, Torleif Thedéen and Elisaveta Blumina will perform a spectacular programme of cello and piano sonatas by Schumann, Beethoven, Kancheli and Prokofiev.