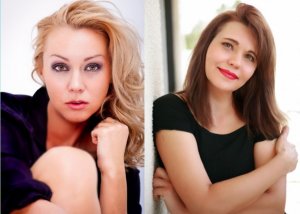 Anastasia Maximova Gonsales Moreau (mezzo soprano) is one of the most vivid phenomena in the world of contemporary music. Opera singer, graduate of the St. Petersburg State Conservatory. Rimsky-Korsakov, she has an unearthly beauty and strength in her voice – the dark colored soprano. Being a teen with plaits sticking out on her head in the role of co-host of the popular Russian TV show “The Musical Ring”. Anastasia, humourous and playful, first surprised everybody with her variety experiments, incredibly synthesized pop with operatic vocalizations. A rare gift to unite the unconnected is almost the most feature of the work of this mature and multi-faceted artist, which now is Anastasia Maximova. She is also famous as a song writer, including pop songs and as a film composer. Anastasia is additionally a founder and art director of the primary Russian interactive opera theatre midnight Opera where the soloists involve the audience to take part in the opera performance. Anastasia did concerts in all over Russia and European countries – Italy, France, England, Greece, Estonia, Cyprus. She took part in special concerts dedicated to the most important Russian and European events – World Hockey Championship, International Economic Forums, Summits in St. Petersburg, opening of the haute couture Week in London and Paris, opening ceremony of the international conference in Patra and etc. Also, she performed a lot with her solo programme of Chaikovsky and Rachmaninov arias and romances. Additionally to the wonderful voice, she also has the strongest stage energy, that fascinates the audience of all countries.

Natalia Lezedova (piano) is a graduate of the Musical faculty of the State pedagogical University of Russia, and she has postgraduate studies in “Musical Art” (2012). She attended an advanced training course from the rimsky-korsakov St. Petersburg State Conservatory (2013). She is additionally a laureate of 5 international competitions, among them: 2 first prizes as a performer-soloist (Saint-Petersburg and Moscow 2012), winner of the Grand-Prix music festival competition “Severnaya Venetsia” (2012) and 1st prize laureate as a concertmaster (Music Competition in performing arts in St. Petersburg, 2013). In recent years she has arranged many concerts in Cyprus, most of them for charity, and she has collaborated with musicians from Russia, Cyprus, Italy, French, Germany and United Kingdom.