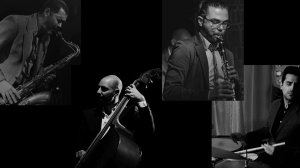 A few words about the musicians
Charis Ioannou was born in Nicosia, Cyprus in 1976. In 1997 he was enrolled at the Berklee College of Music in Boston, where he studied saxophone performance and Jazz Composition. Charis won the Woodwind Achievement Award in the last year of his studies in Boston and in 2001, after graduation, he moved to New York where he stayed for three years. While in New York, Charis earned his Master’s Degree in performance from the New York University and in the meantime performed and taught around the state. Charis left the United States in 2005 and moved back to Cyprus.
The return to his homeland country found Charis collaborating with various musicians and appearing in all the major clubs and festivals around Cyprus as well as various venues around the world including performances in Greece, Kuwait, Germany, Lebanon, Kazakhstan, Poland, Serbia, Spain, England, Italy, Luxembourg, Belgium, Holland and the U.S.A. Charis has also collaborated with the American Embassy in Cyprus in a Bi-Communal Jazz program called Jazz Futures through which he has appealed all over Cyprus performing alongside the group of Ari Roland and Chris Byars for 6 years during the period 2007-2013.
In 2015 he led BopCy, a quartet with all Cypriot musicians and won the 2nd place in the first Greek Jazz Competition held in Athens in the same year and appeared in Syros as part of the International Jazz Day 2015.
Charis is currently teaching the saxophone and the jazz idiom at the University of Nicosia as well as making guest faculty appearances in workshops held in Italy, Lebanon and Greece and continuing to perform and record as a leader as well as a sideman in Cyprus and abroad.

Konstantinos Efraimidis was born in Thessaloniki, Greece, in 1986. He started his classical studies at the age of 12. He is a classically trained clarinetist who received his diploma from the State Conservatory of Thessaloniki. During that time he was a member of the State Conservatory Symphonic Orchestra, the Symphonic Orchestra of Aristotle and the Concert Band of Sindos. He is currently continuing his music studies in Jazz Performance under the instruction of saxophonist Charis Ioannou at the University of Nicosia. Since moving to Cyprus, he has become an active member of the local music scene. He is a member of the Avanti Crossover Symphonic Orchestra, a member of the Steppin’ out Jazz Trio with Alice Ayvazian (voice) and Dimitris Miaris (piano), and with a gypsy jazz band: The Hot Club of Cyprus. Since October 2016 he is the clarinet teacher at the English School of Nicosia.

The drummer Marios Spyrou was born in Nicosia in 1990. He was inspired from an early age by his father, who is also a jazz drummer. He has played extensively with the top Cypriot jazz musicians and has a Masters in Jazz from the Koninklijk Conservatorium in Holland.