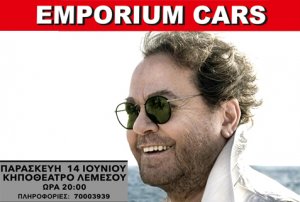 The Greek singer Yiannis Parios, known as “the singer of love”, will perform in Limassol on the 14th of June, 2019.

Parios is for several decades one of the most popular singers in Greece and Cyprus but he has also performed in Albert Hall, the Carnegie Hall and many major venues in Canada, Australia, the United States, Germany, Belgium, Switzerland, Turkey and Israel.

Tickets are available online at www.tickethour.com.cy and at the box office of the theater.