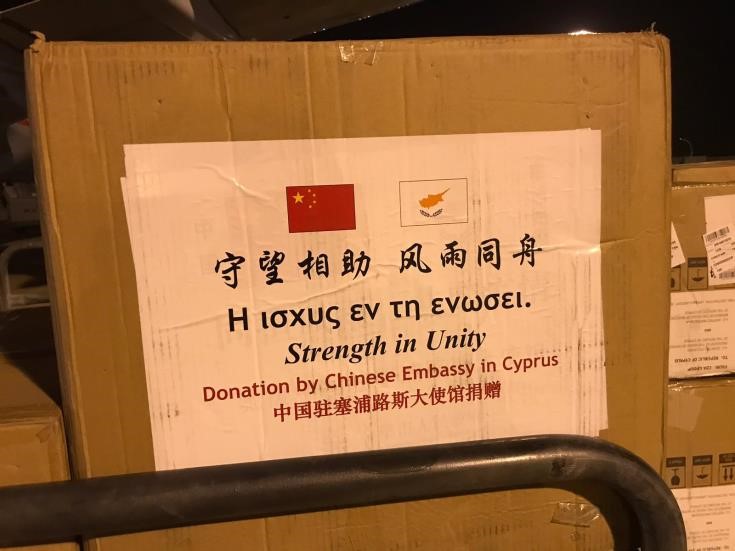 The third batch of China’s donation of medical supplies will be transported to Cyprus next week, onboard a Cypriot chartered flight, says the Embassy of China to Cyprus. China is ready to reciprocate Cyprus’ kindness, as a true friend and trustworthy partner, a relevant announcement says.

According to the Chinese Embassy, Ambassador Huang Xingyuan and Foreign Minister Nikos Christodoulides will attend on Monday the handover ceremony of China’s donation to Cyprus, at the Ministry of Foreign Affairs in Nicosia.

It is noted that on April 11, the second batch of China’s donation of medical supplies arrived at Larnaca via a Cypriot chartered flight along with other procured goods of Cyprus. This batch of medical supplies include 20,600 FFP2 masks, 110,000 disposable medical masks, 30,000 non-medical masks and 500 non-medical protective coveralls donated by the Embassy of China in Cyprus, Chinese companies and sister cities, it is added.

The third batch includes 5,000 protective coveralls, 417 sets of test kits (for 10,008 persons) and 10,000 N95 masks which belong to the official aid from the Chinese government to the government of Cyprus, along with 50,000 disposable medical masks donated by sister city will be transported to Cyprus onboard anther Cypriot charter flight, the Embassy announcement says.

It is also noted that on April 2, China handed over the first batch of medical supplies to Cyprus, including 1,320 protective coveralls, 5,000 KN95 masks, and 5000 disposable medical masks donated by the Embassy of China in Cyprus and Chinese companies.

“In the past two weeks, the Embassy of China in Cyprus has made or is making free provisions of over 14,000 disposable medical and non-medical masks to the municipality of Pafos, local hospitals, schools and government departments to help alleviate the shortage in medical supplies” the Chinese Embassy says.

Moreover, it is noted that since the outbreak of COVID-19 in Europe, China has been closely following the situation in Cyprus. “The Embassy of China in Cyprus has been working in partnership with the Ministry of Foreign Affairs and the Ministry of Health of Cyprus on a 24/7 basis as part of the joint prevention and control efforts” the announcement says.

It is also noted that in this urgent mission to aid Cyprus, both public and private sectors of China have been fully engaged. “Chinese local governments such as the City of Jinhua of Zhejiang Province, Chinese companies such as Huawei, and cities of Nanjing and Guangzhou, sister cities to Limassol and Ayia Napa, have all done their part by lending a helping hand in different ways. We are pleased to have learned, that the Chinese communities in Cyprus and their Cypriot neighbors and friends have been voluntarily helping each other out in this difficult time. Nothing could have been more effective in demonstrating the true spirit of Strength in Unity” the Embassy notes.

Moreover, it says that both China and Cyprus have shown impressive determination and resilience in combating COVID-19. “Driven by a strong commitment to safeguarding health and security of citizens of both countries and the world, China and Cyprus enforced comprehensive and rigorous measures in a timely manner to contain the spread of the virus and spared no effort to treating patients” the Embassy goes on.

“As China fought against the epidemic full front, President Nicos Anastasiades, House President Demetris Syllouris and Foreign Minister Nikos Christodoulides sent letters of sympathy and support to the Chinese leadership, and made an active effort in ensuring the legitimate rights and interests of the Chinese diaspora in Cyprus. We are deeply moved by this invaluable friendship of Cyprus and will keep it in our hearts. As situation in Cyprus gets critical, China is ready to reciprocate the kindness and continue to provide support within our capacity to Cyprus as a true friend and trustworthy partner” says the Embassy of China.

The Embassy notes finally that through joint efforts of both China and Cyprus, Cyprus will be able to win the fight against COVID-19 soon and that the friendship and partnership between the two countries “will come out of the pandemic even closer and poised for further growth.”