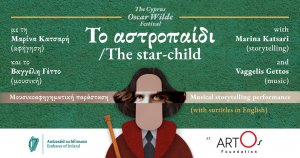 A child who is convinced that he originates from the stars disrupts an entire kingdom with his awkward behaviour. He underestimates people showing him kindness, he taunts nature’s power and, finally, denies the perishable human nature. Oscar Wilde, through his ‘’star-child’’, offers a miniature masterpiece that describes the difficult journeys to adulthood and the knowledge of the world.

The musical storytelling duette of storyteller Marina Katsari and musician Vaggelis Gettos, known for their dynamic and atmospheric narration and sounds, give life to the amazing fairy tale of the great Irish artist, for only 2 performances, 15 & 16 March, 20.00, at Artos Foundation, 64 Agion Omologiton, Nicosia.

The performances take place within the frame of ‘’The Cyprus Oscar Wilde Festival’’, which is co-organised by the Embassy of Ireland in Cyprus.