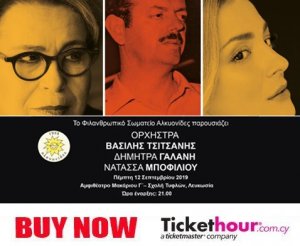 Galani and Bofiliou will perform a repertoire of Tsitsanis’ music with absolute respect to his original work and upholding the intensity that exudes from his songs.

Tsitsanis was a Greek blues master, songwriter and bouzouki player, instrumental in the evolution of modern “rebetiko” and “laiko” music in Greece. He wrote more than 500 songs throughout his career and is best known overseas for the popular song, “Cloudy Sunday”, which he wrote and performed during German occupation in Greece in WWII.

This new orchestral ensemble has been created by the composer’s family to perform and promote his work in Greece and overseas, under the guidance of Manolis Pappou, master bouzouki player and an expert in Tsitsanis’ work.

All proceeds will be given to charity.