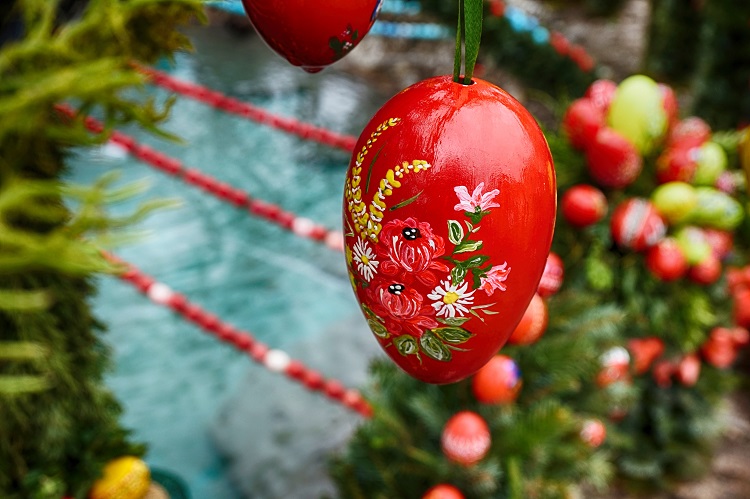 On Holy Thursday (3 days before Easter) Cypriot households make traditional Flaounes. This Cypriot cheese-filled pastry filled with ground mahlepi in the dough which gives a hint of almond flavor. The whole family gather from early in the morning and they all have their part in the making process. Also, another Easter delicacy is Greek Easter Bread – Tsoureki, the traditional sweet bread. You can recognize this bread because it will have a red Easter egg baked right in the center. All ingredients in this bread and Flaounes were forbidden during Great Lent and that’s why we eat them at Sunday’s table feast.

On Holy Thursday or Saturday, the households dye red eggs. You wonder why? The red color symbolizes the blood of Jesus and the egg has come to symbolize Jesus Christ’s tomb. This is a visual reminder of the fact that He died on the cross for the whole humanity. Also, the egg is a symbol of renewing one’s life as well as celebrating life’s victory over death. Moreover, when people return homes after the church on Saturday midnight, the families sit together at the table and start with tapping the red eggs with each other. This symbolizes the risen Christ’s blood. One taps their chosen egg on top of the other’s chosen egg, saying “Christos Anesti” (meaning “Christ has risen”). The other one responds, “Alithos Anesti” (meaning “Indeed, he did!”). Each time there’s a “winner” and “loser”. The tapping continues until there’s only one winner- the chosen one with the un-cracked egg! The one with the strongest egg will have good luck for the rest of the year.

The Symbolic Statue of Christ

Holy Friday is a day of mourning, the churches’ bells ring sorrowful melodies. On that day, people don’t participate in anything. Before they attend church, women, and children will often take flowers to decorate the symbolic statue of Christ. The community attends the night church in order to mourn the death of Christ. The tomb of Jesus is carried in the streets while the people follow it and hold candles.

Just before midnight, the church goes completely dark and the bell ring to proclaim the resurrection. After midnight, the church lights up with candlelight as people light their candles from the candles of people standing next to them and start chanting “Christos Anesti”. Also, they are lighting up fireworks and crackers!

Once the sun rises on Easter Sunday, you can smell all the fire pits and grills being lit. The traditional Easter meal is a roasted lamb which represents the “Lamb of God’. According to the Apostle John, Jesus is the Lamb of God. He died on the cross as a sacrifice for people’s sins. Eating lamb honours this sacrifice.

Enjoy Easter Sunday, Monday and Tuesday in the beautiful villages of Cyprus where traditional games are organized at churches’ yard and playing fields.